Fr. Santor speaking at the last St. Hedwig's Christmas Party 2016.
I interviewed Fr. John Santor in 2015 and was joined by his sister Theresa (Santor) Feyas.

Father John E. Santor, son of the late Edward and Sabina (Podbielski) Santor, was born on May 26, 1939, in Erie, Pennsylvania.  Fr. John grew up on East 2nd Street and attended St. Hedwig’s Church and School.

According to her obituary on Find-a-Grave, Mother Sabina Podbielski Santor was the daughter of the late Boleslaw and Katarzyna Bilvin Podbielski and stepdaughter of the late Aleksander Jechna. She left school at age 14 to manage her parents' corner grocery store, Jechna's Food Market, at East Second and Wallace streets.

The Jechna’s Food Store stayed open until the 1960’s.  Grandmother Jechna always had great hospitality and took good care of the immigrants.

Fr. Santor also remembered Potocki’s on 2nd and Parade and Krawczyk’s Store right across the street from St. Hedwig’s.  The kids bought ice cream there and tapped the counter with their nickels to get their attention.

Fr. Santor’s father Edward, worked on ore boats and freighters, and was later a roofer. The grandfather worked at the “Ruberoid Company,” which made roofing shingles.  Fr. said his dad had a 1937 Ford that lasted for 17 years and did not rust!  His father had the first telephone on the block because he had his own business, roofing & furnaces.

Meals on Sunday were at grandma’s house.  Their family also went for Sunday rides for ice cream and glazed donuts.

Fr. Santor remembered the old St. Hedwig’s School as a tinder box, with sheet metal covering the outside.  The boys would have to shovel snow in the winter and polish the school floors with rags on their shoes, shuffling along.

His sister Theresa Feyas remembered having Girl Scout meetings in the basement and watching movies every Friday.  The movies were mostly “Laurel and Hardy,” and “Abbott and Costello.”

She learned her prayers, history and religion in Polish; and grammar and reading in English.  Theresa’s mother got her hair all curled for her First Communion, and she was so happy.  Unfortunately, the nun told Theresa it was sinful and made her wash it out.

Fr. John was a little younger and took Polish language lessons and the rest of his lessons were in English.

They both remembered Msgr. Robaczewski. You could smell his cigar smoke the minute he walked in.  When he gave out the report cards, he would check how much you gave for collection.

The children would perform plays for Msgr.’s birthday and receive the day off.

Fr. Santor was an Altar Boy at St. Hedwig’s.  He wanted to quit, but Msgr. Robaczewski told him, “Losers never win, winners never quit.”  So, Fr. Santor stayed. Afterwards, he accidentally set the velvet curtains on fire when he was lighting candles. Fr. Anthony Nowakowski (an Assistant Priest,) put the fire out.
Fr. Santor participated in Altar Boy Contests where they would write an essay for Catholic Vocation Day, and he won $10 a couple of times.
Fr. Santor was also a school crossing guard with his classmate Victor Glembocki Jr.

One of Fr.’s memories were of Sister Symphoria.  He said she was built like a tank and would throw the kids against the blackboard, but also added that these young nuns had to deal with 60 children in the classrooms and had to be strong and physical.

Some of their favorite nuns were Sister Theotoma, Sister Jane, and Sister Valesia.  Their 8th Grade Principal was Sister Auxilia.  Theresa skipped the 6th grade with a few others because she said they probably needed the room. 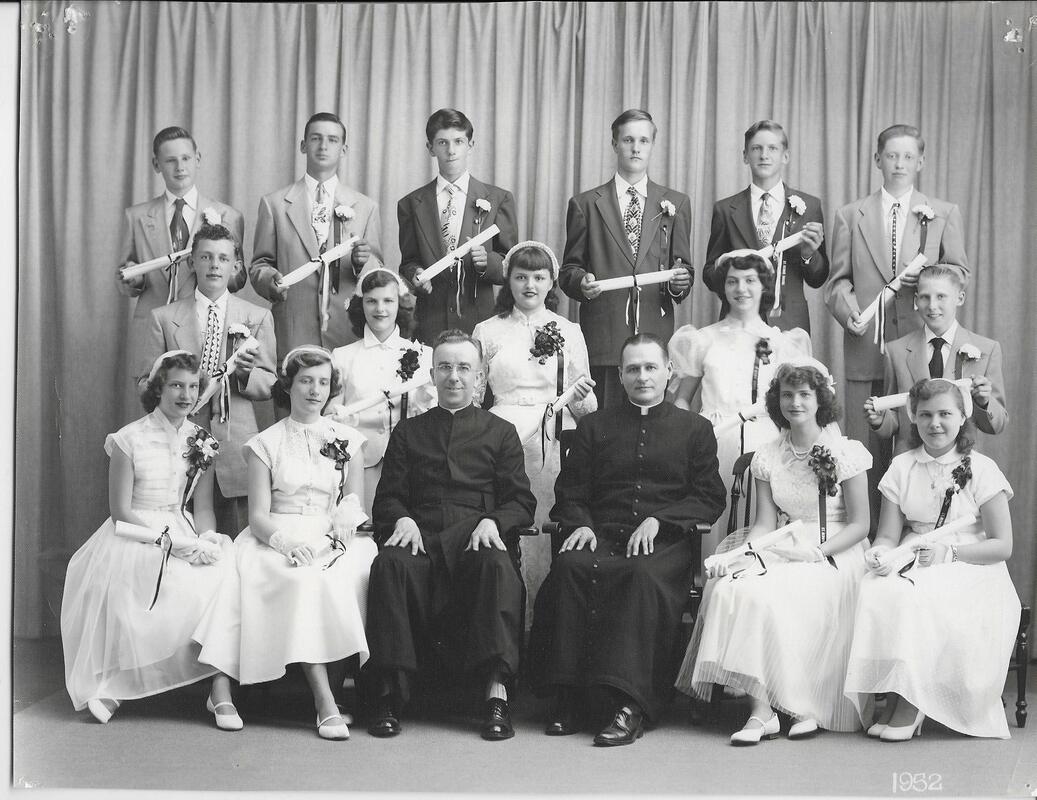 Class of 1952 St. Hedwig School. John Santor top row far right. Father’s Nowakowski (left) and Cebelinski (right).
Fr. also had a paper route for the Erie Dispatch-Herald for about three weeks.  Some bigger boys beat him up and took his money, so that was the end of his route.  He also took accordion lessons .What did they do for fun? Theresa Santor Feyas remembers Roller Skating on 12th and French Streets, and movies every week at the “Columbia,” “Colonial,” and “Shea Theaters.”  She enjoyed the musical and adventure films and the “Kiddie Club” at the Warner Theater.  Some of her favorite stars were Dorothy Lamour and John Hall.

Fr. Santor enjoyed the war and cowboy movies and cartoons with his friends.

He attended Cathedral Preparatory School. Fr. Santor did not feel the call to the Priesthood until he was an older teen.  After praying about it, he approached his parents who supported him in any decision he would make.

When Fr. Santor became a Deacon, he approached his Pastor at St. Hedwig’s, Father Joe Cebelinski, who said, oh, okay, and he did not seem interested.  He met Fr. John Tellers of St. John the Baptist Church in Erie, and Fr. Tellers asked if he could help him.  Fr. Santor said he was the nicest man in the world.


“Fr. Santor credits many people for nurturing his faith and his vocation: his family especially his parents Edward and Sabina; his teachers, including the Felician Sisters from St. Hedwig, the Sisters of Mercy, the Sisters of St. Joseph and Benedictine Sisters; fellow priests: and even his “Catholic heroes” Mother Teresa of Calcutta, St. Teresa Benedicta of the Cross, St. John XXIII, St. John Paul II, Father Jerzy Popiełuszko and Father Walter Ciszek.”
Fr. John Santor was ordained a Priest of the Erie Diocese on May 25, 1965. 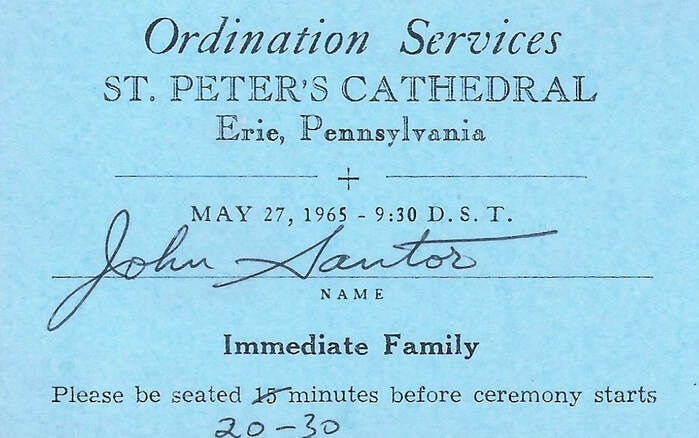 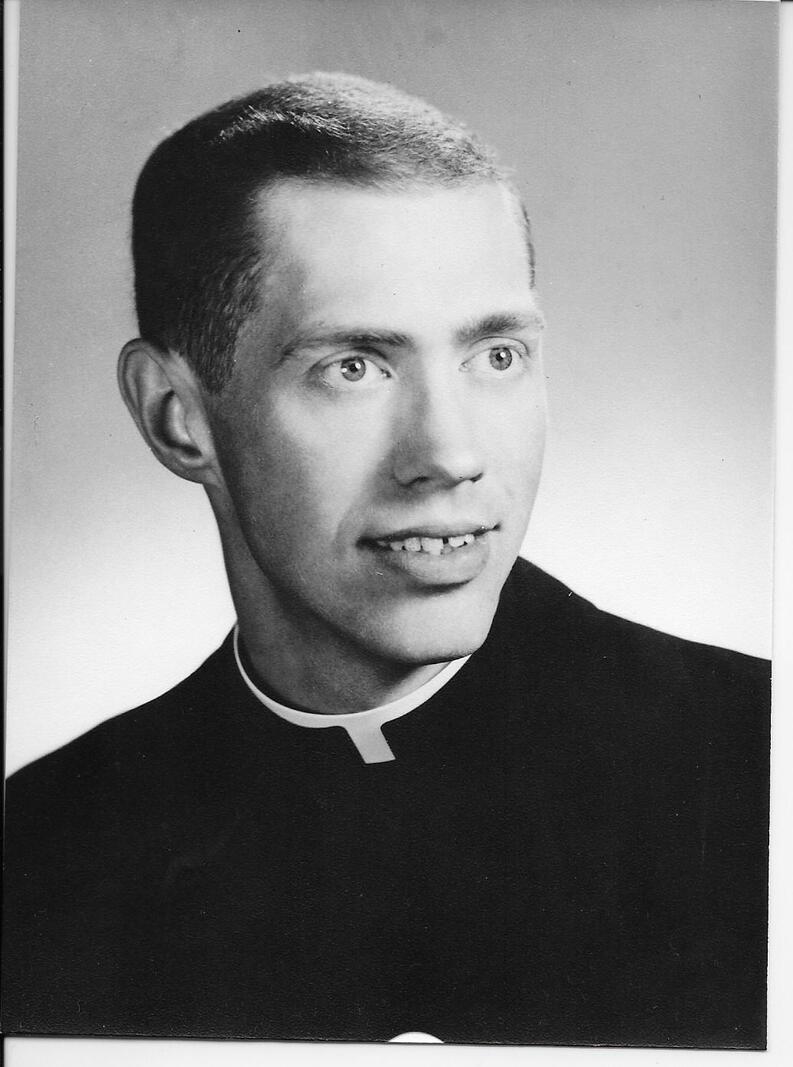 Fr. John Santor was ordained a Priest of the Erie Diocese on May 25, 1965.
The following is from a program celebrating Fr. Santor’s Fiftieth Anniversary as a Priest:

Father Santor was a weekend assistant at various churches around the diocese, and from 2002 to 2007, he was a resident of St. Casimir.
He was an Administrator at St. Stephen Parish, Erie.
He served as Chaplain of Sisters of the Divine Spirit, Gannondale, Pleasant Ridge Manor East and Twinbrook Nursing Home.
From 2001 to 2010, Father Santor served as Diocesan Coordinator of Pastoral Outreach to Refugees.
Although he retired in 2010, Father continues to minister to the refugees and to the people of his native Parish, St. Hedwig, where he celebrated the Saturday vigil mass each week.
​
​In 2017, St. Hedwig’s Parish was merged into St. Stanislaus Parish as the result of the Diocesan Pastoral Planning Process.
Fr. Santor would sit at the altar at St. Stan’s until poor health made it impossible to do so. He now is confined to his home but continues to minister his words on Facebook.
It was an honor to interview Fr. Santor.  He is one of the kindest people I have ever met, has a great sense of humor and a positive outlook and is a great influence to me. 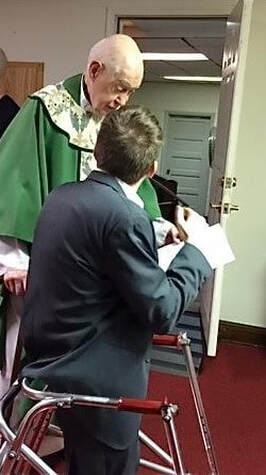 Fr. Santor and I talking before the last weekend Mass at St. Hedwig's Photo courtesy of Walter Helminski. 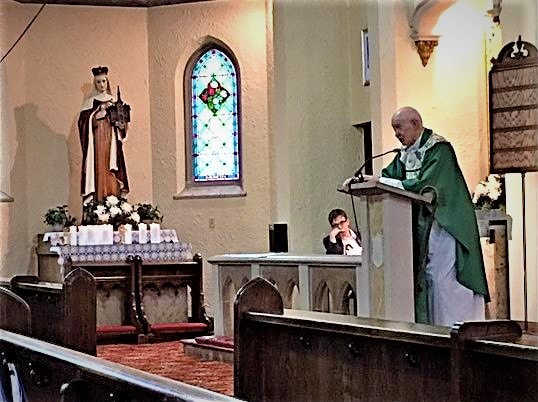 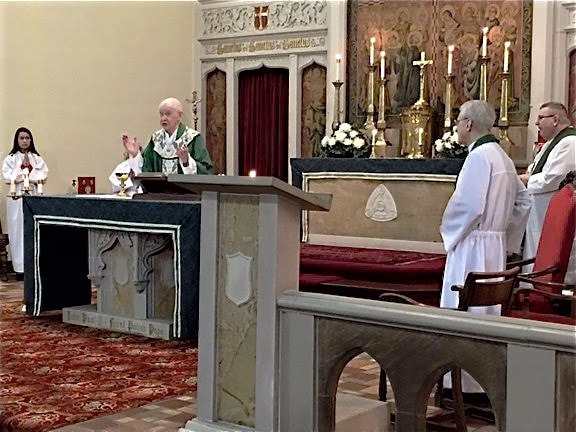 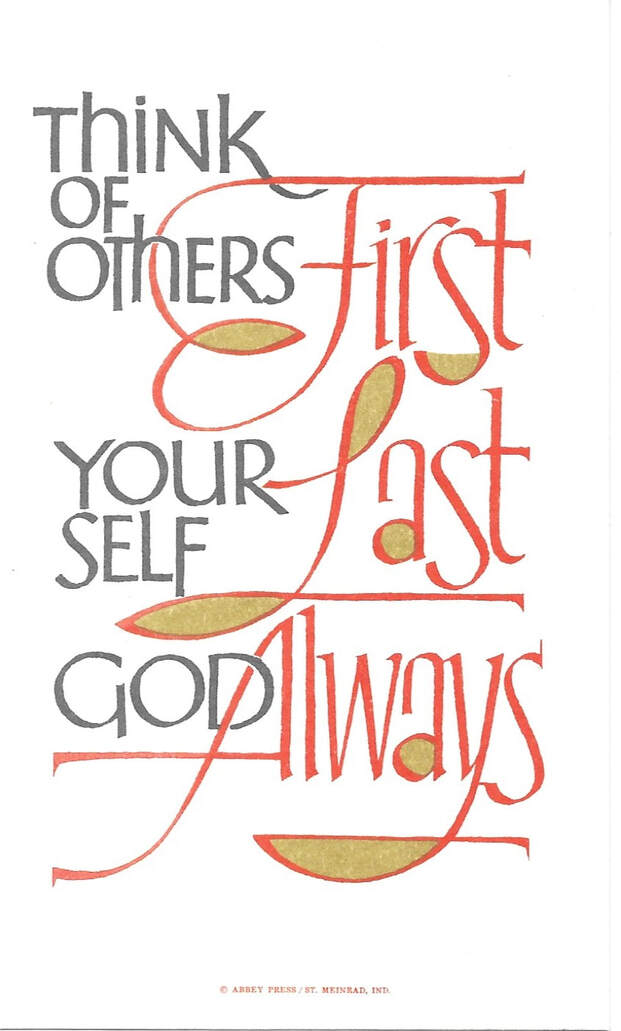